There’s a nice coherence in having one’s birthday right up against the new year, even if it did mean enduring a childhood of “Merry Christmas…and Happy Birthday All at Once!” presents. Year-end reflections and any thoughts that come with turning a year older happen all together, and each calendar year lines up nicely with a year in my life. I’ve never been one for resolutions or remaking myself in any fundamental way, but an added year is always a welcome chance to step back to recalibrate some. I’m skeptical of  any overarching sense of human progress as destiny, but I do think the power of introspection and stopping to learn from the past is one of the things that makes human life worth living.

Twenty-seven feels like a heavy one. Maybe because it’s certifiably “late twenties” now, but more likely because it’s my first birthday as a full-time adult with a career and no diversion from that career in sight. This is life now, and I’m just going to pile up the years as I go on with my working life. Each turn of the calendar page just brings me closer to middle age, puts on a little more pressure to check off the next set of boxes on the list of goals, especially after a year in which there was an awful lot of box-checking. Not everything needs to happen at once, and measuring life only by checked boxes is a poor way to think about things. But I won’t pretend that checking those boxes doesn’t set a strong foundation that allows everything else to flourish, and it’s hard to understate the benefits of finally having things all lined up. Wandering through a portion of one’s twenties is only worthwhile if one learns some necessary lessons. Mission accomplished, I suppose.

Before I get to work on those remaining boxes, though, I need to stop for a moment, and to think about what I’m really aiming for next. This holiday season, rich and rewarding in so many respects, left little time for introversion: this was my first weekend at home without houseguests in over a month, following journeys to Minneapolis and Chicago and Wisconsin, and playing host for New Year’s. I need these moments.

So, this Sunday, I set out to find some solitude on a skiing adventure. It was nothing that would trouble a seasoned skier, but it was still a healthy 15-plus kilometer trek over sometimes shaky trails, from the Northwoods ski area north of Silver Bay to a small camp in the heart of Tettegouche State Park on Lake Superior’s North Shore. It’s a trip I’ve long wanted to make, and now was as good a time as any. And so I set out with my skis, a lunch, and a bottle of whiskey with a few sips left in it from New Year’s festivities.

Northwoods is already the prettiest ski area in the region, thanks to its thick stands of balsams along the Beaver River and its beautiful outlet on to the floor of cliff-lined Bean Lake. (Alas: a sign at the parking lot alerts us to an impending, and probably necessary, thinning of the balsams by loggers.) Just as the trail turns away from the Beaver toward the daunting Herringbone Hill, an alluring spur offers a five-ish kilometer connection to Tettegouche. (Signs and maps offer differing distances, but it’s somewhere between 4.8 and 5.5). The trail is ungroomed, but sees enough traffic that there’s a healthy track at the start. Ungroomed trails offer constant undulations, and occasional needs to skirt frozen pools, or to climb or descend hills covered by small plants that resemble barren sticks in winter. It’s slow going. There are no brutal hills on the Tettegouche connector, and it’s little enough used that it’s never fast, but there are a few slopes that require careful negotiation.

Keeping one’s eyes on the tracks, however, can be difficult on this trail. The reason is simple: this is, by several degrees of magnitude, the most beautiful stretch of trail I’ve ever skied. The trail enters the Palisade Valley and snakes between walls of talus, these rugged ridges that score the earth north of Silver Bay. Pictures can’t quite capture the completeness of the beauty as I slide along between snow-covered boulder fields, frozen ponds dotting the route below. I start to climb gently, the leafless trees allowing views far across the valley. I cross a few snowmobile trails, and come to a spot where some furry animal met its demise from the skies. I climb the steepest hill on the trail to a view between looming twin erratics; a sign welcomes me to Tettegouche. Before long, I come to a long, somewhat narrow clearing, and the trail dies completely. But it seems clear enough that I should cross this opening, and I edge forward with some caution, as I suspect Palisade Creek is somewhere beneath me. I stick to the top of drifted snowy ridges, figuring something must hold it all up beneath. At times I sink deep into the drifts, at times I glide along the top without leaving a track. My geography skills haven’t failed me: a faint trail appears on the opposite end of the long clearing, and I immediately encounter an intersection with a map.

Perhaps the biggest adjustment to working life has been the structure. Suddenly, there is always a map, and little time to explore its less worn trails. While I’m not busier than I was in school, being in an office from 8 to 5 is just a very different lifestyle from a haphazard student schedule. I hardly expect much sympathy if this is one of my greater worries, and it’s driven by my own ridiculous need to be doing something (and maybe multiple things) every single waking moment. But as valuable as structure can be, it can come at the expense of serendipity, and leaves moments of wonder too few and far between. It seems paradoxical to schedule in time to for beauty and wonder, but in these parts, one doesn’t have to travel far to find it.

Beyond the intersection the trail is packed down by snowshoes, and moves quickly up and down through a silent pine grove. Faster than expected, I sail down an easy slope to the Tettegouche camp, a collection of four cabins and a communal lodge in the heart of the state park on Mic Mac Lake, accessible only by trail. It’s empty when I arrive, but an older couple skis into camp from the north just after I break into my lunch in the lodge. We chat as I eat, colder when stationary in this unheated building than we were when skiing along. (For the non-northern Minnesotans who wonder how we do it, cross-country skiing is enough work that it doesn’t require a heavy jacket, even on a single-digit day like this one.) The woman admires the route I’ve taken, wishes that her body could still handle that many kilometers. I only hope that I, like her, can find someone who will still go with me on spontaneous adventures like this when I’m her age. After they leave me, I wander down to the frozen lake, sublime in repose, and then begin my trip back.

As always, return journeys are faster, with familiar landmarks dotting the route. A number of stretches are a cross-country skier’s greatest delight, those easy, steady, incredibly long downhills. I can lull into thought here, develop a new plan of attack for adult life. I take my last slug of warming beverage in a spot where I can see hills rising up in all directions: a rock-strewn cliff to the right, the walls of Bear Lake up to the left, lonely Round Mountain and hulking Mount Trudee, subject of many a vulgarity on my post-graduation hike this past summer, visible behind. I don’t need the whiskey to feel a warm burn. The sun, stuck behind a grey wintry haze after some moments of morning clarity, sinks toward the top of the ridge that separates me from Bear and Bean Lakes, even at this early afternoon hour. Back on the Northwoods trails, my muscles start to protest; this stretch seems longer than I’d remembered. The trail system is empty, just me and the balsams, though a large crew with young children is just setting out when I finally coast back into the parking lot. I expect I’ll be doing that in the not so distant future, too.

It’s an hour drive back to Duluth. The morning sea smoke has lifted, and Lake Superior is a steely grey; for once, the clouds are welcome, as they blot out the sun that always seems to hang in one’s eyes during winter drives back down the Shore. I may be a little older now, and my knees are a bit cranky, but as I tune in the Packers’ playoff game and accelerate past Split Rock Lighthouse, I feel the youngest I have in months. As long as I can still blend that ambition with that sense of wonder, I can still channel the best of that kid who left Duluth for Georgetown, the best of those instincts that pulled me home, the best of those thrusts outward and journeys back through this endless cycle I live. 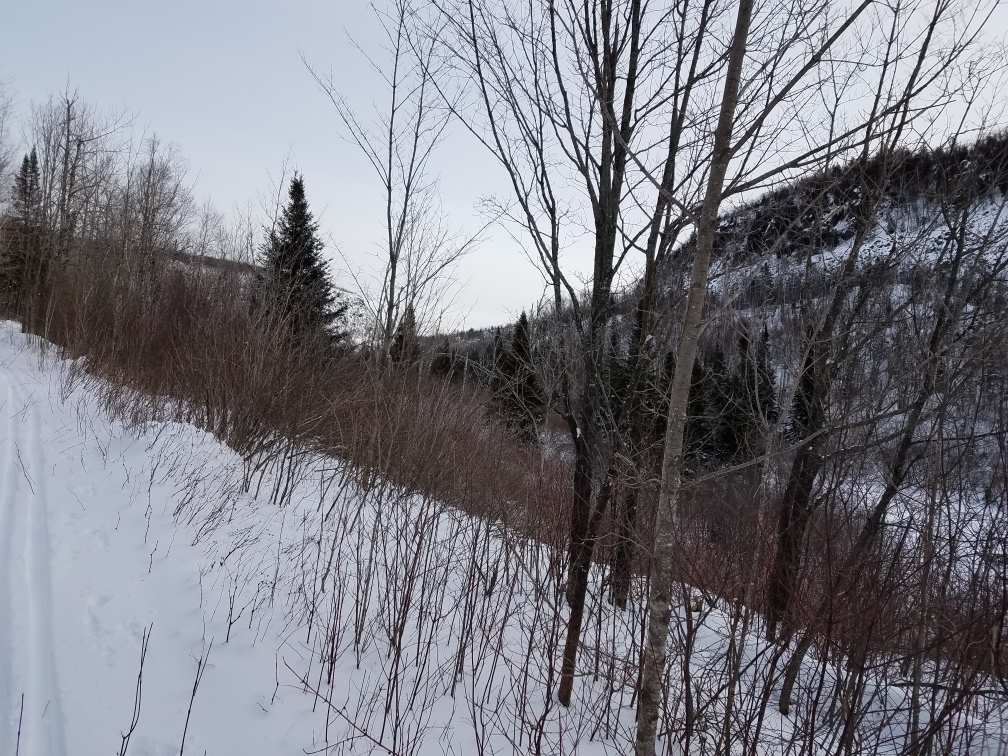 I already knew all of this, of course. It’s no secret. But it’s so incredibly easy to let that slip away. At the very least, a few sore muscles will remind me for the next few days, and with any luck, this latest jolt will pierce through the dragging everydayness that too often grinds down that ambition and wonder. There’s no stopping now. There’s no telling how many kilometers of unbroken snow separate me from home.