One day in late February 2012, Prof. Patrick Deneen of the Georgetown Government Department (now at Notre Dame) modestly told us students that he was going to give us the “answer to everything.” He proceeded to draw three circles on the chalkboard and explain human nature in the clearest manner I’ve ever seen. It’s an oversimplification, of course, as all such representations must be, but it’s an excellent starting point, and now forms the basis of my worldview, such as it is. What follows is my take on the three circles. I’ve also embellished his drawing with some of my obvious artistic genius. 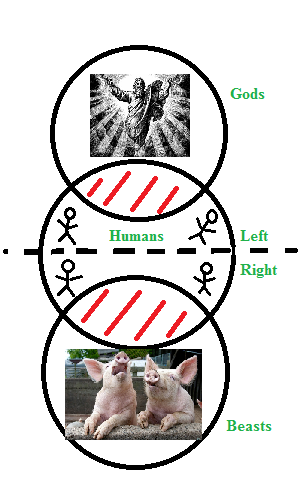 The three circles represent three rough spheres of human possibility. The center sphere is basic human action; above it we find gods who transcend human appetites and obsessions and lead lives of bliss, and below it we find the beasts, who fixate on instinctive and immediate fulfillment of those appetites.

One very large camp of people, most of them on the political left, draws a line through the center circle and focuses only on the top. They see humanity as fundamentally good, but simply constrained by unfortunate social or historical structures, and believe we can better ourselves by liberating ourselves from them. (This being the left, they often don’t believe in explicit “gods,” but the idea is much the same: humans are the masters of their own fate, subservient to no one, and can be the authors of their own salvation.) The general sense is that everyone has great potential, and it can be unlocked with the right combination of incentives and supports.

Most fundamentally, though, it aims to liberate people so that they’re free from the existing order and can just be their own awesome selves, deciding what’s right and wrong for themselves. If we turn people loose and have a safety net ready when they stumble, things should turn out alright. Humanity can be improved in this way, and the world can become a better place; depending on how far you want to go, we might even be able to perfect it. Marxism took this way of thinking to its furthest possible extreme, but the word progressivism, often used to describe the left-of-center agenda, captures the sense here. Humans are capable of progress and are going somewhere, wherever that might be, slowly making the world a better place. Other relevant philosophers here include Rousseau, the French positivists, John Stuart Mill, and Hegel.

The right also draws a line through the center circle, but focuses on the bottom half, not the top. (Deneen, a self-described conservative whose conservatism bears no resemblance to the contemporary Republican Party, used the term “liberal,” though I think my left/right terminology maps better on to current-day politics.) For the right, humans are fundamentally fallen, and while we may put on shows of benevolence and decency, the self-interest underneath can’t be wished away. Absent strong social mores and an established order, humans will rut around and kill each other and generally live in a miserable state of anarchy. No amount of wishful thinking or fanciful social engineering can get rid of those base instincts that we all have, and the manner in which many on the left react when confronted by conservatism is decent evidence of this. Hence the reliance on tradition, and the insistence on a strong state to keep things in line. (Machiavelli and Hobbes are the go-to philosophers here.)

This way of thinking can take other forms, too. The framers of the U.S. Constitution, for example, saw that those in power were just as likely to be corrupted as anyone else, and sought to limit their ability to exercise power. The Constitution is a fairly conservative document; it makes little effort to guarantee any positive rights that can lead toward the good life. It was written in response to some of the worst of human excesses, and only in some of the amendments do we find a more progressive turn. The emphasis is on recognizing and managing the tragedies in life, which no amount of “progress” can stop.

There is third approach here, less often used but alluring to some: just cut out the middle circle. This is Nietzsche. We have a choice, he argues. We can either be impressive Ubermenschen dedicated to living thrilling and fulfilling lives, taking control of everything and ruling nobly, or we can be feeble, weak people carried along only by resentment and grievance, seeking a pitiful life of bland comfort. It was a good thing for Nietzsche’s already frail health that he didn’t live to see suburban subdevelopments and reality TV. Still, this worldview is attractive for those who slog through Nietzsche: who wouldn’t want to be an Ubermensch? It’s a delightful lifestyle, and it makes for a very crisp, self-serving distinction, as the enlightened ridicule the pitiful masses below. (This is where we’d find the Nazis, who tried to hijack Nietzschean philosophy and turn it into a justification for their atrocities.) That’s a bit of a misreading of Nietzsche, but it also illustrates the weakness of this approach: no matter how hard one tries, it’s impossible to stay on top like that, and very easy to fall back into vindictive backbiting. The divisions aren’t that crisp.

This brings us to the last approach, which encompasses all three of those circles. It recognizes that humans have qualities that overlap with those of gods and of beasts, but that, in the end, we’re somewhere in between, wandering between the two and often in an ambiguous middle realm. We’re not inherently good; we’re not inherently bad. We have moments where we reach toward god-like status, and we have moments where we live among the beasts, and in the end we’re left with a confusing mix that isn’t quite as black-or-white as we’d like. The boilerplate left and the right stances both get part of the picture, but neither one quite grasps it all.

This is a very old notion of human nature, and its modern-day caretakers are, for the most part, Catholics, following in the tradition of Augustine and Aquinas. I’m not Catholic, but Catholicism has always hovered around my life, from deeply faithful grandparents to Catholic universities to travels in Mexico, so it’s probably no surprise I find this worldview most appealing. (Sticking with Nietzsche, we might say I’m living in its shadow, and quite thoroughly.) The very word “catholic” means, roughly, “about the whole” in Greek: it encompasses the totality of life, and tries to cover everything. To use my current favorite word, it’s holistic.

Theology digression: even if this seems obvious, it really isn’t a common worldview in this day in age. One need only look at the reactions of the left and the right to our current pope and his predecessor: one side loves Francis while the other is skeptical of him, and vice versa with Benedict. This is a pretty good sign that people are coming to the popes not as Catholics, but instead as liberals or conservatives who want Catholicism to conform to their preordained political worldviews. This isn’t to say that one can’t disagree with certain aspects of papal teaching, and that popes themselves may not be influenced by different forms of thought, but it reveals the disconnect, and how wholly we’ve adopted the modern political mindset in how we try to analyze things. Faith, for most moderns, has become a crutch in times of need and a source for inspiration that can give people a little nudge down a preordained path. But rarely is it a way of life, and when it is, it seems fundamentally alien. Moral therapeutic deism reigns triumphant.

Still, the three circles begin long before St. Peter. Prof. Deneen is a staunch Catholic, but he wrote one of his first books not on anything Catholic, but on the Odyssey and how it fit this conception, with Odysseus constantly pulled both up toward the gods and down toward the beasts. Philosophically, the man at the root is our old buddy Aristotle, who said that beasts or gods are unique from humans in that they’re capable of living free from community. But since we can’t ever live entirely in one of those realms, we’re neither. This doesn’t mean we have to submit ourselves solely to a communal order, whether it be of the left or the right; it just means we have to live in constant accordance with that fact. Instead of starting our theories by considering humans in vacuums and making presumptions about their nature from there, we need to understand each other socially. You can find a lot of spilled pixels on that topic elsewhere in this blog, so I won’t belabor it here, but in the end it does boil down to living in community and finding our niches within whatever ecosystem we call home, realizing it is neither heaven nor hell. Instead, it is complicated, and complication deserves respect, though once we’re inside it we can certainly leave our own marks. (Equally important is the need to step out of the community from time to time, in order to gain some perspective, before heading back in.)

Six years ago, when I left Duluth for Georgetown, I cared only for the top half of the diagram. My admissions essay for the School of Foreign Service was a paean to the power of liberal education to change the world. I don’t think my evolution was a complete surprise—in retrospect, I’m pleased with the subtlety expressed in the more thoughtful writings of my adolescent self—but evolve I did, from a fairly activist man of the left to something a lot more murky. Fixing the world’s problems proved a lot more difficult than waving some liberal magic wand, and my personal experience also suggested I was missing something.

Eventually, I found it. This was great for my understanding of the world, but something of a disaster for someone whose pre-college career interests had involved saving the world, and using the progressive agenda as my vehicle. I went home to Duluth, part out of philosophical belief in the community closest to me, and part because it was the only place I could go to figure out what the hell came next without undue stress. “Duluth needs people like you,” Prof. Deneen told me in our final meeting, and I took those words to heart.

I don’t know if Duluth needs me, but I sure needed Duluth. I’ve slowly gotten myself tied up in community affairs over the past two years, and I’ve found that this whole philosophy really does work in practice. I’ve also started down a career path that nurtures those goals; one that seems to have a healthy balance between practical work and the up-in-the-clouds thinking I enjoy but can take too far. It all worked out. I’ve found healthier channels for some of my instincts, both the ones that told me I could be a god and also the ones that had me wallowing in muck. (Channels, I hastily add; not stoic suppression.) I’m only human, so there will be continued temptation in both directions. But for now, I spend most of my time grounded in the middle circle and reveling in my community, where I belong.