Unlike our last two stops, we don’t know anyone in Vancouver. My friend and I are strangers in a strange land…that is, we’re a person with Canadian heritage and another who grew up a stone’s throw from the border, in the least exotic of foreign nations for an American traveler. A full day in Vancouver will be a welcome break from nonstop driving.

We’re in a hostel on the West End, left to our own devices to make an itinerary. It’s a bustling place with herds of Germans, a multigenerational group of women, and the usual collection of college-aged kids with backpacks, though our roommates for the first night are a middle-aged German motorcyclist and another older man who keeps me up for a while by scratching his head over and over again. All of my previous hostel experience was in Mexico, so this time around, I feel a bit old as I sit typing in the lobby and watch a herd of German boys ready themselves for a night on the town. The markers of time are unavoidable.

Our Vancouver explorations begin west of the hostel, as we head for the shoreline and follow it through Stanley Park, a giant green space at the tip of the spit that holds the city’s downtown. Parts of it could be deep in the woods, save for the soft drone of seaplanes and occasional toot from a ship. Beaches line the route, though we also venture into thick woods that look familiar to a Minnesotan, except everything is a bit larger, a bit lusher. We loop past the Lions Gate suspension bridge over to North Vancouver and slip back down to the seawall, where we pass a free little waterpark that serves as a ten-year-old’s paradise, and pass the Lumbermen’s Gate, a sculpture with intriguing design and a better name. A collection of totem poles brightens up a far corner of the park, towering symbols of indigenous Canadian pride, and a small lighthouse peeks out on the foremost promontory. We wander past the yacht club and the rowing club, admiring the boats and vaguely wondering their worth. 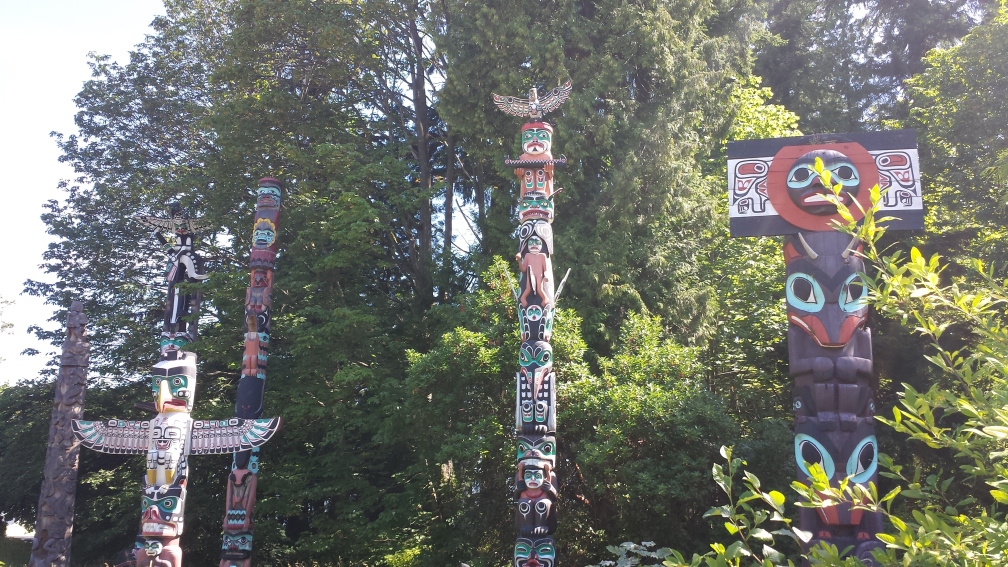 We find the Olympic cauldron from 2010 near the Convention Center, though it’s lifeless and undergoing maintenance. Lunch takes place at a café a few blocks up, and we get a taste of the heart of Vancouver’s financial district, which has an easier pace and a bit more life than its American counterparts. Our next steps head back toward the waterfront, and pass through a large train station to grab tickets on the Sea Bus. This passenger ferry shuttles us across the Vancouver Harbour to North Vancouver, another branch of the city with yet more towers and port facilities. We wander briefly to appreciate the views of downtown from across the water, and grab a beer on the deck of a market overlooking the water. 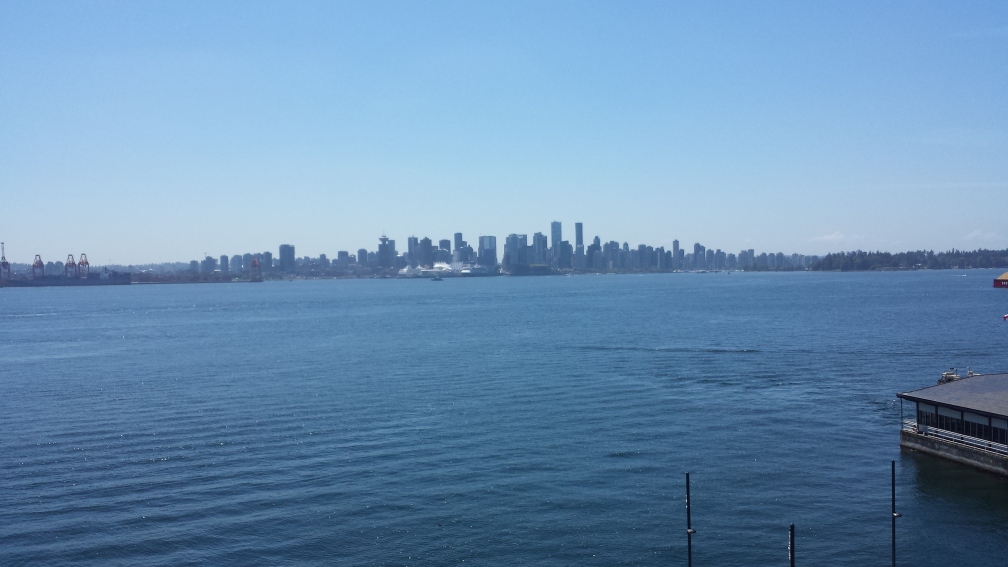 After the Sea Bus deposits us back downtown, we venture into the car for a short while to cross back on to Vancouver’s southernmost peninsula. We wander up and down the mall of the University of British Columbia, a modern but tasteful campus with some superb views of the sea. We drift back down to a nearby beach and walk along it for a spell in search of a stretch short of seaweed, but aren’t terribly successful. Vancouver may not be renowned for its beaches, but it’s still pleasing enough to dip our feet in for a little while. Traveling back across the Kitsilano neighborhood can be a chore—the left turn lane, it appears, has not yet come to Canada—but we make it back to the hostel for a quick recharge before dinner. 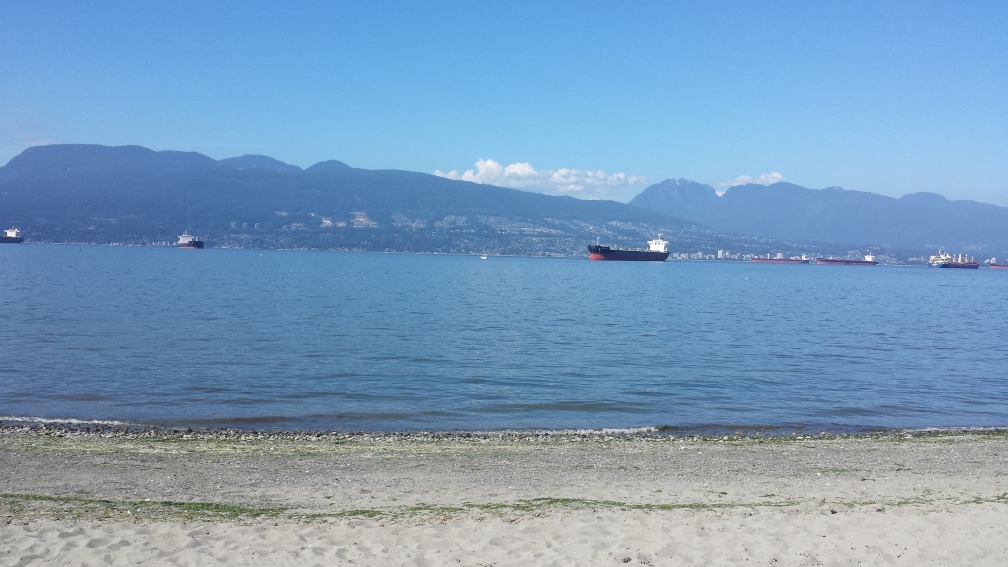 Our trip to dinner is a meandering walk that guides us along the False Creek waterfront, down to BC Place (busy with a Vancouver Whitecaps MLS game), and past the Roman colosseum of a library. The city’s new towers blend easily with the older architecture in the evening sun, and it all adds up to a marvel of a view. I’m left wondering if this city ever looks less than perfect, though we soon find out when a block degenerates into a giant homeless camp. Unlike San Francisco, Vancouver seems to cluster it all in one place. Still, we find a quality restaurant in an old brick building with immaculate décor. We splurge a bit here, and enjoy West Coast seafood; I go for the clams, along with a few beers from the completely unfamiliar Canadian craft brew menu.

Vancouver is a city of remarkable comfort in a superb location. While most major American cities didn’t build much housing in the 70s and 80s, it kept its vitality going; it’s not always an architectural win, but it’s created a dense, livable core. The 2010 Olympics and Chinese investment have kept it booming since. Perhaps it’s just because we don’t know it as well, but it also doesn’t quite have the edge of its West Coast brethren like Portland and Seattle, for good or ill. How very Canadian.

I don’t drink coffee. I live enough of my life somewhere between on-edge alertness and outright anxiety that I don’t need much in the way of caffeine to keep me going. As this trip has shown me, I can go five hours behind the wheel with little more than some cheap green tea as a pick-me-up. But on Day Nine of this road trip, I’m in Seattle, so I have no choice but to grab a cup at a swanky-looking café. I found it almost tolerable as I sipped at it over the course of an hour, which I suppose is a win. 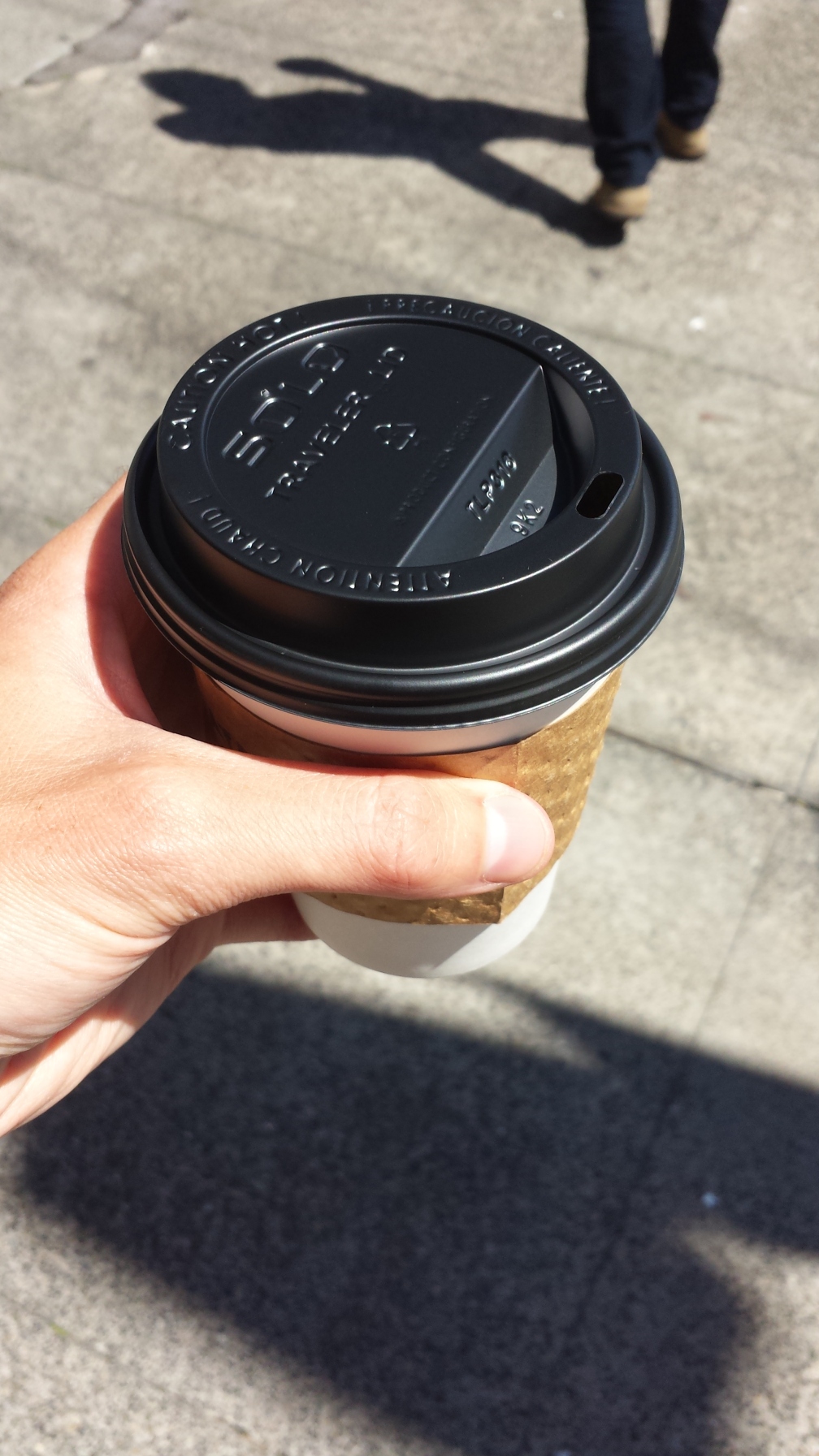 The day began with the easiest border crossing I’ve ever had. The trip south from Vancouver was only mildly eventful, as we coped again with the lack of left turn lanes, the price of Canadian gas (don’t believe that harmless-seeming low price per liter they advertise), and an exit that did not have a return entrance to the southbound lane, leading to an adventure through Canadian suburbia. Surprise: it’s little different than American suburbia, though perhaps a little more compact, and some of Vancouver’s diversity came out in the number of Sikh names on the lots for sale.

After the border guard welcomes us home, we make a pit stop at the Peace Arch on the border. It’s a bit of marble right on the border, with flags from both countries and proclamations of cooperation. The whole experience makes the formality of the guard station almost laughable: we park just around the bend and wander freely between the two countries along the grassy median between the northbound and southbound lanes. A block away, a Canadian residential street faces an American park, with nothing more than a brown sign to point out the international boundary between them. Never have borders seemed more arbitrary.

We arrive in Seattle a couple hours later, and check into our hostel, which is in a more historic, classier building than our Vancouver digs. A friend from grad school has some recommendations that we follow throughout the day, and the first is perhaps the biggest hit: a scrumptious Thai lunch by Chinatown. The only issue is a struggle to understand the city’s parking stickers, but a Japanese lady comes to the rescue and makes sure ours is displayed properly.

We wander past the Mariners’ and Seahawks’ stadiums, get our coffee, and past city hall, which is surrounded by a tent city. This is one of the most striking things about the West Coast: the ubiquity of homelessness. It is everywhere, far more visible than in Minneapolis or Chicago, or even New York or Washington. The group around the King County Courthouse, with well-ordered tent rows and banners protesting evictions, are the most organized homeless I’ve ever seen. My hosts in San Francisco and Portland were both careful to distinguish between two distinct homeless populations in each city: the traditional homeless population, and a category of people who have more or less voluntarily chosen an alternative lifestyle. They’ve followed the Into the Wild script, only without actually venturing into the wild. How do they affect the dynamic here, and does the activism in places like Seattle lead to genuine results? We can only speculate.

My friend and I devote the rest of the day to tours of parks around Seattle. First up, the Seattle Center, with its iconic Space Needle and musical fountain, which entertains us for a while as it shoots jets of water at children who run in fear but keep venturing closer anyway. Next up is Gas Works Park, a converted refinery that now offers a commanding view of downtown from Lake Union. After that, we fight rush hour traffic up a nearby hill to Volunteer Park, whose water tower offers an even more complete view of the skyline. Its leafy green spaces are a haven amid a packed city, and a man cruises about in his convertible, blasting Vivaldi for our edification. 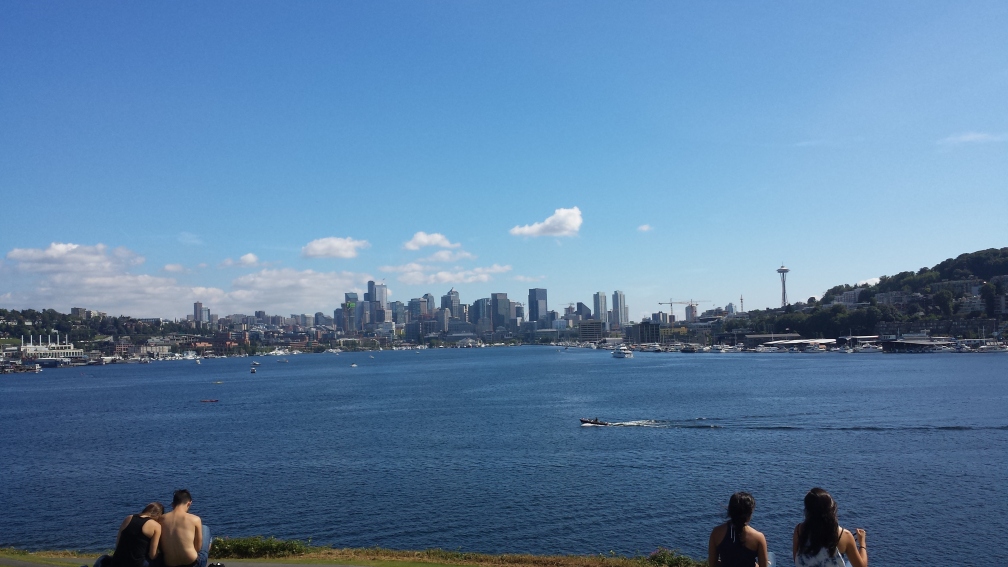 The final park, however, is perhaps the sweetest spot we find in Seattle. Discovery Park is northwest of downtown, out on a point into the Sound beyond a quiet, middle-class neighborhood. The parking area and first bit of hiking through some woods are innocent enough, and we skirt an apparent old military instillation without much enthusiasm. Then, however, the landscape opens up into a broad grassy prairie, with a view of the ocean beyond. Eventually the grass turns to sand, and we’re atop a scrubby bluff over the Sound. A trail leads down through lush forest, and before long we’re out on a stony beach littered in driftwood. We’re here toward sunset, and that golden glow we saw two days before at Deception Pass settles in over the Sound. The two paddleboarders who glide by make their craft appear elegant for possibly the first time ever. 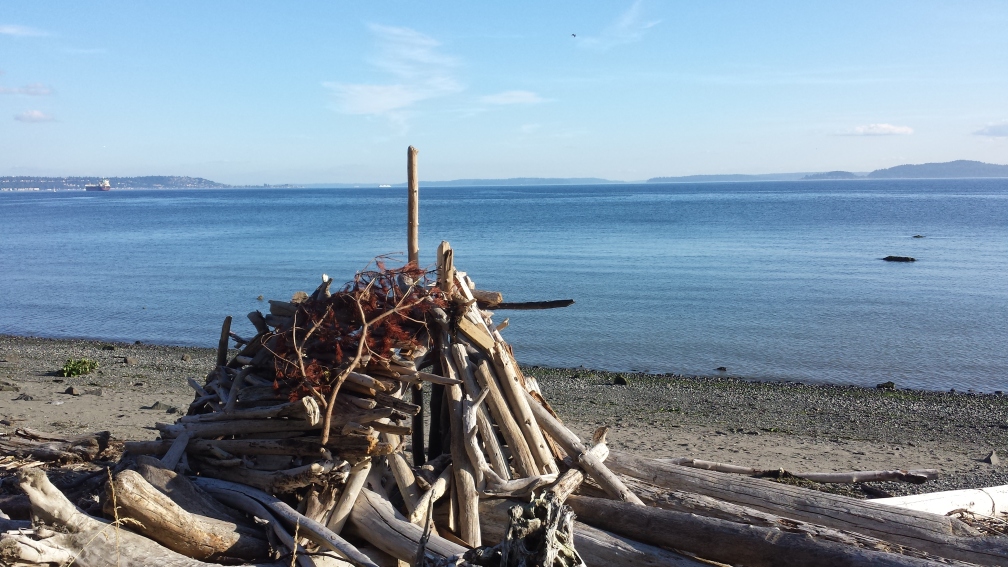 After a stop back at the hostel to give our phones a little more juice, we stop by Pike Place, Seattle’s classic tourist market. We’re too late to see any thrown fish, but we still get the feel of the historic streets, and meander into the world’s first Starbucks. The rest of our night follows the advice of my friend through Capitol Hill, with dinner at a superb cantina followed by drinks at a dive and a more upscale second-story place next to a bouncing ballroom dance hall. Seattle, we muse, has a lot of pluses over the other coastal cities we’ve visited: not as costly or crowded as San Francisco, a bit more cosmopolitan than Portland, more of an edge than Vancouver. The traffic is a nightmare, however, and we’ve caught it on a sunny day, with none of the famed rain. We only got a taste. My next trip, wherever it may lead, should be a deeper dive.