Eight years ago, I spent inauguration day freezing to death in Washington D.C. I was a Georgetown freshman, and there was no other place to be, particularly in the aftermath of an election that, whatever one’s politics, was certainly historic. Living in what was then (but is no longer now) a majority black city also gave me an added window into what Barack Obama’s ascendance meant for some people, particularly on election night, when I saw tears and joy that, I understood, were for something I would never be able to feel.

Not that a Midwestern white boy couldn’t try. I made sure to drink it all in: a national day of service event at RFK Stadium, a star-studded inaugural concert at the Lincoln Memorial. My cousin and his friend drove in from Indiana for the spectacle–I didn’t sleep the night before, as I awaited his arrival–and my dorm became a boarding house, with bodies sprawled across the common room. A group of us started down to the Mall around 4:30 and stood, huddled and chilled, for hours amid a throng of millions. Barack Obama was just a speck in the distance from our spot on the lawn, somewhere near the Hirshhorn Museum. We had a better view of the snipers on the roof of the National Gallery than we did of the new President, and the hike back to the Hilltop involved dazed weaving through mazes of port-o-potties. Still, it was all worth it, and I’m reminded of it almost every day: a few of those American flags they gave us to wave about still decorate my apartment. 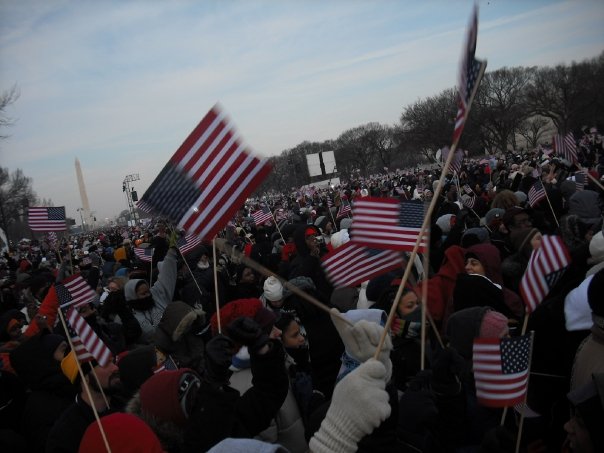 I knew I was living history. I knew that, somehow, I needed to capture what this moment felt like so that I’d remember it. And so I wrote a few paragraphs. I was nineteen, and had only started writing in any serious sense a couple of months before. I had potential, though I also had a rookie’s penchant for florid prose:

The ceremony is to be a re-affirmation of the American faith in democracy. Its venue, the world’s most austere cathedral; the vast morning sky reaching from horizon to horizon in its embrace. There is no ceiling, least of all one of glass; simply the sky reaching towards the heavens…”

Yikes. The glass ceiling line is kinda cute, but come on, Karl. Are you really shamelessly comparing your country to a church? And seriously, that verb construction in the first line?

Fortunately, despite being an idealistic kid consumed by Washington’s atmosphere at the time, I was not among those who expected some sort of grandiose change out of Obama. Not that it mattered. That sweeping rhetoric, both the root of his appeal and the eventual source of disappointment for a number of his allies and disgust for many of his opponents, created a mythology that distracted from the actual art of governance. Later in the essay, I nail it:

There are no messiahs in politics. There are only humans, resplendent in their glories and glaring in their flaws. Time is short; there is work to be done. Soon the aura shall fade into memory, and unforgiving reality shall continue its steadfast march. To see the mountaintop is not enough; to stay upon the mountaintop remains an impossibility.

But for one day, such realities can be cast aside, and the awe-inspiring might of symbolism can run rampant in the mind. Often the import of great events lies not in actuality but in the power they wield in the human perception. And in this sense, this day can trump them all.

I can only laugh wryly at my verb choice in that last line.

In retrospect, that last paragraph was truer than I imagined, and Donald Trump’s election is as good a sign of that as any. So much of politics is emotion and symbolic power—what is ‘Make America Great Again’ if not symbolic?—especially on a distant national level when we’ve never met the people involved. I can be, and often am, more pleased by some election results than by others. But I will never be able to say I understand the joy black people felt upon Obama’s election, just as I’ll never be able to understand how Donald Trump could cause great joy in others, either. This isn’t to claim these emotions are in some way equivalent, but merely to marvel at how much a person we’ve never met can elicit life-defining sensations.

Part of me has grown downright scornful of this impulse to put faith in someone’s election, no matter the reason. This is the most insidious of vicarious lives, to cast one’s hopes on to some inevitably flawed human; Caesarism at its worst, a hopeless projection of hopes and dreams on to some distant figure of power when the most important work one can do to secure those aspirations is right here at home. But another part of me suspects I’d be fighting a losing war against human nature if I were to rail against this impulse full throttle.

It’s something of a paradox. I have little trouble being coldly rational in how I weigh most things, including the effectiveness of politicians I agree with or my own reactions to momentous events. And yet there are few things that have as much of a pull on me as passionate youth, and (joking a few paragraphs ago aside), I pass no harsh judgment on my earlier words. We tend to experience the world more vividly in our formative years, to live more fully in emotional surges. And while it requires the proper mindset, I do actually enjoy revisiting some of my old writing, understanding it as an essential part of growth and not just some fixed moment of an incomplete self. Those glimmers we get in those formative years are among the most important moments we encounter. Joan Didion: “one of the mixed blessings of being twenty and twenty-one and even twenty-three is the conviction that nothing like this, all evidence to the contrary notwithstanding, has ever happened to anyone before.”

Inauguration Day 2009 was the peak of an arc that eventually swung through a park in Mexico City two years later, an outburst of troubled words in the days after I left Washington, and has landed me right back where I came from, delighted to be where I am. Joan Didion eventually said Goodbye to All That, and she was right to do so. It’s all happened before, will probably all happen again. There’s nothing so unique about this moment that past experience can’t speak to.

But that doesn’t mean the insight from this moment isn’t real, doesn’t mean the emotion that comes out of it can’t continue to course through what we do, in some way or another. So if I shrug impassively at this next inauguration, it’s not because I’ve abandoned what I felt eight years earlier. It’s merely its natural culmination. A deeper fire still burns. I have work to do.

One thought on “Goodbye to All That?”