Today is perhaps the most quintessential American holiday, a lovely blend of consumerism and pop culture and raw spectacle: Super Bowl Sunday. The day that breaks through the monotony of midwinter and gives us endless punditry, provides an excuse to drink lots of beer, singlehandedly sustains the avocado industry, and even involves an athletic event at some point in the midst of it all. People who know nothing about football will go to parties anyway, where they will complain that the commercials aren’t that good this year, and that the halftime show was bad. But they’ll still watch, just as they’ll watch again next year, and the year after that. We all love it, even if we hardly care.

On many levels, football’s success makes no sense. Its rules are arcane and illogical. While it can be adapted to suit, say, a tiny rural high school, high-level football requires a roster in excess of fifty players, more than double that of any other major sport. Yet despite the giant rosters, only a few individuals—the quarterback, the top receivers, perhaps a running back or a flashy defensive player—really get much individual attention; most everyone else toils in obscurity, never to handle the ball without a stroke of luck. The three-to-four-hour affairs amount to roughly eleven minutes of actual action. The stop-and-go nature of the sport allows for a dizzying array of possible plays, the intricacies of which are usually lost on the casual viewer. It is a sport of full-throated machismo, the only one in which women don’t have their own leagues (Lingerie Football League excepted), and while that is a draw for a certain segment of the population, it does nothing to explain football’s success relative to, say, wrestling.

It is a common denominator, something you can chat about easily even with the kindly mentally-challenged person sitting next to you on the bus who insists on talking at you, or with that relative you cannot relate to at all. The Friday Night Lights factor is real, even far from small Texas towns: it brings communities together, and football games are part of the rite of passage in high school. As much as things change, most of the school still turns out for that game and shares in one of the few vaguely universal American experiences, something passed along across generations at every level, from high school to the NFL. In college the party gets even bigger, with whole Saturdays oriented around the game, and alumni—or wannabe alumni—letting it rule their lives in a way no other sport can. Football becomes the center of so many social lives. 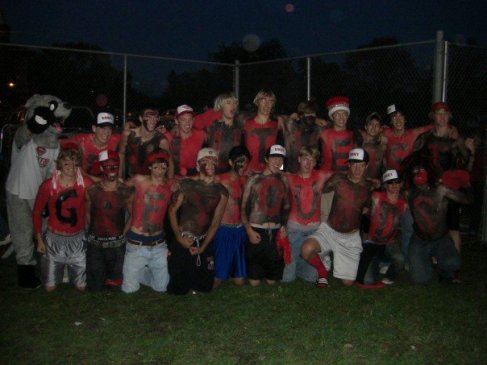 Call it a civic religion of sorts. Baseball, hockey, basketball, and soccer have international reach, but football remains about as purely American as is possible in a globalized world. The schedule lends itself to drama and anticipation: games are rare enough that fanaticism doesn’t require following a team night in and night out. A full week of hype makes it much easier to anticipate the key points of each game, and that is perfect for spawning that offshoot game where there is plenty of money to be made, fantasy football. It has its roots in elite east coast colleges, but it’s become a blue-collar sport, and the various positions require a variety of skill sets. While most good players come from the South—again reinforcing the Pure Americana aspect—there are strong college teams to be found in every corner of the country. Somehow, it gets everyone on board.

Yet for all of football’s triumphs, there are some cracks in the walls. The most obvious concern involves the recent revelations about concussions and brain damage that football can cause, and this has indeed had some effect on youth numbers. Football is increasingly becoming the sort of sport we like to watch other people play, but may have issues seeing our own children play. It may take a while for that to affect the upper levels or overall interest in the sport, if it ever does, but it’s looming there, and will continue to get attention in the media.

The biggest changes, however, may come in the college game, which eclipses the NFL in some parts of the country. At its best, the NCAA tops the NFL, with greater traditions, more rabid fans, lack of forced parity, and even more strategic variety. But it also is also developing in ways that may alter the sport as we know it. The traditional power conferences have re-shaped themselves in a massive money grab, a process that will only make the rich richer. Perhaps even more significantly, there is serious talk of compensating athletes now, and that story took another twist this past week when the Northwestern University team announced its intent to unionize. The football players’ concerns aren’t unfounded; they bring in millions for their universities without any compensation, have to balance intense football demands with student life, and have little ability to fight the ham-handed, authoritarian NCAA.

Compensating college football players may be the just thing to do, but I don’t think it produces a stable long-term solution. It opens up several cans of worms: other student-athletes will ask why they’re not included, and as very few university athletic departments make much money, it’s not clear where the money will come from. All of this adds up to even more pressure on the NCAA model, and I don’t think it’s much of a stretch to expect an alternative to erupt in the not-so-distant future. There’s a reason most other sports rely on an extensive system of low-paying professional minor leagues. Players specialize, abandoning the “scholar-athlete” title—one that at its best gives football players necessary balance in life, but at its worst stretches football players between two worlds—for the dream of football above all else. Once the established pipeline breaks down, when there is no clear place to look for the best talent, when good players get lost in myriad minor leagues with limited national interest, there is pressure on the whole system. It will be a slow process, but slowly, surely, football’s communal power will break down. If football players simply become football players instead of representatives of some bigger institution, the ties will start to fray. Football won’t fade from cultural prominence overnight, and the Super Bowl will likely be the last holdout. But the pinnacle of the sport must rest on strong foundations, and there has never been this much uncertainty about the foundations.

Football isn’t high on my list of favorite sports, so if this all does come to pass, I won’t really lament its fall from the pinnacle of American sports. What I will worry about is the loss of another commonality, the further atomization of American life. I don’t think that is necessarily a bad development—I’m a big defender of diversity over bland universals, after all—but it will mean change, and it is hard to know what might follow.

But for now, pass me the chips. Also, I’m taking the over on Renee Fleming’s National Anthem, the Broncos on the coin toss, and the Seahawks in the game. Defense wins championships.